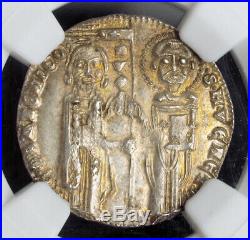 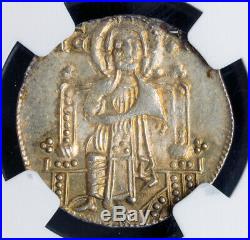 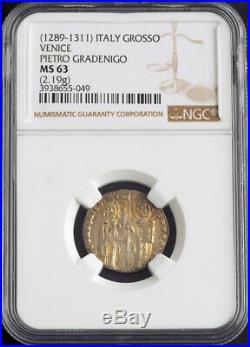 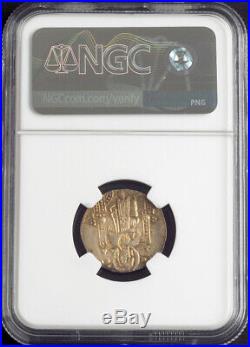 1311, Doges of Venice, Pietro Gradenigo. Certified and graded by NGC as MS-63!

Privy mark (three dots) to inner right. Christogram (IC-XC) at sides above. In Eastern Christianity, the most widely used Christogram is a four-letter abbreviation, a traditional abbreviation of the Greek words for "Jesus Christ" i.

The first and last letters of each of the words. With the lunate sigma common in medieval Greek, and written with titlo (diacritic) denoting scribal abbreviation. On icons, this Christogram may be split: on the left of the image and on the right. It is sometimes rendered as " ", meaning Jesus Christ Conquers.

" " may also be seen inscribed on the Ichthys. In the traditional icon of Christ Pantokrator, Christ's right hand is shown in a pose where his fingers bend and cross to form the letters , , and.

Pietro Gradenigo (1251 13 August 1311) was the 49th Doge of Venice, reigning from 1289 to his death. When he was elected Doge, he was serving as the podestà of Capodistria in Istria.

Venice suffered a serious blow with the fall of Acre, the last Crusader stronghold in the Holy Land, to the Mamluks of Egypt in 1291. A war between Venice and Genoa began in 1294, and Venice sustained some serious losses: it lost a naval battle, its possessions in Crete were pillaged and the Byzantine emperor, Andronikos II, arrested many Venetians in Constantinople. In response, the Venetian fleet sacked Galata and threatened the imperial palace of Blachernae, but in 1298 they lost again - this time at Curzola. Eventually, in 1299 the two republics signed a peace treaty. Doge Gradenigo was responsible for the so-called.

The Locking of the Great Council of Venice. This new law, passed in February 1297, restricted membership of the future Councils only to the descendants of those nobles who were its members between 1293 and 1297. This move created an oligarchic system, disenfranchising a great majority of the citizens and provoking some unrest. In 1308, during Gradenigo's reign as doge, Venice became involved in war with the Papacyover the control of Ferrara and on 27 March 1309 the Republic was excommunicated by Pope Clement V, barring all Christians from trading with Venice.

The Doge's policy, seen by many as disastrous, led to a plot to depose him and the Great Council, led by Bajamonte Tiepolo and other members of the aristocratic families. On 15 June 1310, the coup failed and its leaders were severely punished. Tiepolo's plot led to the creation of the Council of Ten, initially as a temporary institution, which later evolved into the permanent body which in reality governed the Republic.

On 13 August 1311, Gradenigo died, and, since Venice was under interdict and the religious ceremonies could not be held, he was buried in an unmarked grave on Murano. He was married first to Tomasina Morosini (with whom he had a daughter, Anna, wife of Jacopo I da Carrara) and then to Agnese Zantani. The item "1311, Doges of Venice, Pietro Gradenigo. NGC MS-63" is in sale since Tuesday, August 13, 2019.

This item is in the category "Coins & Paper Money\Coins\ Medieval\European". The seller is "coinworldtv" and is located in Europe. This item can be shipped worldwide.