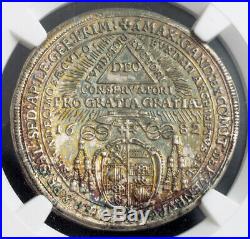 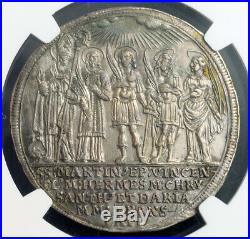 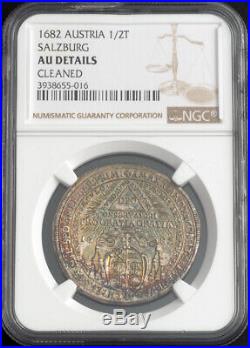 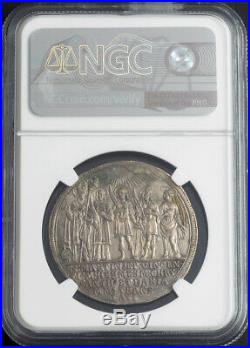 Martin, Vincentius, Hermes, Chrysanthus & Daria and a goose which belongs to St. Inscription in five lines in exergue. VINCEN- / TI9M:HERMES M:CHRY- / SANTH9ET DARIA / MM: TRANS- / LATI. For your consideration a beautiful silver ½ thaler, issued by the Bishopric of Salzburg on its 1100th anniversary. The festivities during that year included a procession during which relics of the depicted saints St.

Martin, Vincentius, Hermes, Chrysanthus & Daria were carried thru the streets of the City in a longg procession. A beautiful coin and a great addition! The Archbishopric of Salzburg was an ecclesiastical state of the Holy Roman Empire, roughly consisting of the present-day state of Salzburg (the ancient Roman city of Iuvavum) in Austria. Maximilian Gandolph , was born in 1622 of an old noble family in Ganz, Styria and was elected as Archbishop of Salzburg in 1668. Even in the beginning of Archbishop Max Gandolph's rule, other problems took precedence.

In 1669, 62 Dürrnberger mine workers drowned in salt. On July 16, 1669, a landslide k! Gandolph's reign was not free from war worries either: France occupied Lorraine in 1670, and raised territorial claims to which Gandolph responded with a contingent under Major von Freysing. A Turkish danger threatened Vienna in the year 1683.

Lastly, the infamous Black Jacket witch trials, where 200 people had been tortured and k! Lled at the behest of Gandolph, had just ended. Therefore, after around 1683, Gandolph had more time to devote to the issue of religious dissent, and he did not like dissent. He was, above all else, an administrator with a taste for regulation and rules. Under his reign, new regulations were issued in abundance and included, among other things, new police regulations, fire prevention orders, safety ordinances, firearms laws, loitering regulations, an alms order of 1678 which included a'beggar land registry', a cleanliness order for the roads and disease protection regulations in 1679.

A cleanliness order for religion was next. The item "1682, Salzburg, Maximilian Gandolph. NGC AU+" is in sale since Tuesday, December 10, 2019. This item is in the category "Coins & Paper Money\Coins\ World\Europe\Austria". The seller is "coinworldtv" and is located in Wien.