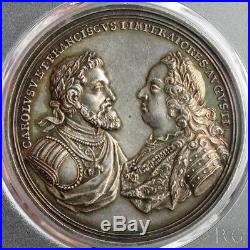 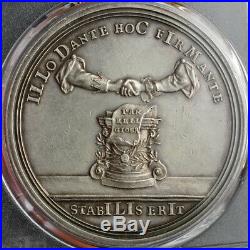 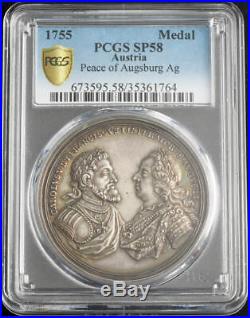 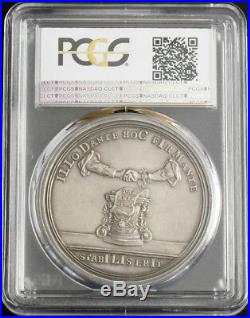 Certified and graded by PCGS as SP-58! Denomination: Medal - Bicentennial of the Peace of Augsburg (September 1555). Diameter: 44.5mm Weight: 29.11gm Material: Silver. Vis-a-vis wreathed, armored and draped busts of the Emperors Charles V (the Peace of Augsburg was signed during his reign) and Francis I Stephen. Inside arm truncation of left bust. Legend: CAROLVS · V · ET · FRANCISCVS · I · IMPERATORES · AVGVSTI ·.

With the former granting [and] the latter affirming. The Peace of Augsburg , also called the Augsburg Settlement , was a treaty between Charles V, Holy Roman Emperor (the predecessor of Ferdinand I) and the Schmalkaldic League, signed in September 1555 at the imperial city of Augsburg. It officially ended the religious struggle between the two groups and made the legal division of Christendom permanent within the Holy Roman Empire, allowing rulers to choose either Lutheranismor Roman Catholicism as the official confession of their state.

Calvinism was not allowed until the Peace of Westphalia. The Peace established the principle Cuius regio, eius religio ("whose realm, his religion"), which allowed the princes of states within the Holy Roman Empire to adopt either Lutheranism or Catholicism within the domains they controlled, ultimately reaffirming their sovereignty over those domains. Subjects, citizens, or residents who did not wish to conform to the prince's choice were given a grace period in which they were free to emigrate to different regions in which their desired religion had been accepted. Charles V had made an interim ruling, the Augsburg Interim of 1548, on the legitimacy of two religious creeds in the empire, and this was codified in law on 30 June 1548 upon the insistence of Charles V, who wanted to work out religious differences under the auspices of a general council of the Catholic Church. The Interim largely reflected principles of religious behavior in its 26 articles, although it allowed for marriage of the clergy, and the giving of both bread and wine to the laity.

This led to resistance by the Protestant territories, who proclaimed their own Interim at Leipzig the following year. The Interim was overthrown in 1552 by the revolt of the Protestant elector Maurice of Saxony and his allies.

In the negotiations at Passau in the summer of 1552, even the Catholic princes had called for a lasting peace, fearing the religious controversy would never be settled. The emperor, however, was unwilling to recognize the religious division in Western Christendom as permanent. This document was foreshadowed by the Peace of Passau, which in 1552 gave Lutherans religious freedom after a victory by Protestant armies.

Under the Passau document, Charles granted a peace only until the next imperial Diet, whose meeting was called in early 1555. The treaty, negotiated on Charles' behalf by his brother Ferdinand, effectively gave Lutheranism official status within the domains of the Holy Roman Empire, according to the policy of cuius regio, eius religio. Knights and towns who had practiced Lutheranism for some time were exempted under the Declaratio Ferdinandei, but the Ecclesiastical reservation supposedly prevented the principle of cuius regio, eius religio from being applied if an ecclesiastical ruler converted to Lutheranism. Was Holy Roman Emperor and Grand Duke of Tuscany, though his wife effectively executed the real power of those positions. With his wife, Maria Theresa, he was the founder of the Habsburg-Lorraine dynasty. Francis and Maria Theresa were married, and they went for a short time to Florence, when he succeeded to the grand duchy on the death of Gian Gastone de' Medici, the last of the ruling house of Medici. His wife secured in the Treaty of Füssen his election to the Empire on. In succession to Charles VII, and she made him co-regent of her hereditary dominions.

Francis was well content to leave the wielding of power to his able wife. He had a natural fund of good sense and some business capacity and was a useful assistant to Maria Theresa in the laborious task of governing the complicated Austrian dominions, but his functions appear to have been primarily secretarial. He also took a great interest in the natural sciences.

He was a member of the Freemasons. Francis was quite the philanderer and was known for his many indiscreet affairs, notably one with Princess Auersperg, who was thirty years his junior. This particular affair has been remarked upon the letters and journals of visitors to the court and his children. He died suddenly in his carriage while returning from the opera at Innsbruck on.

He is buried in tomb number 55 in the Imperial Crypt in Vienna. He was officially succeeded by his eldest son Joseph II although the real power remained with his wife. Another son was the Emperor Leopold II.