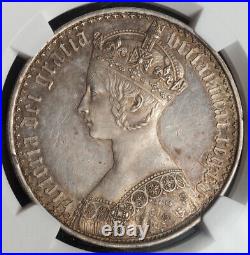 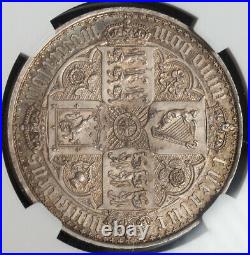 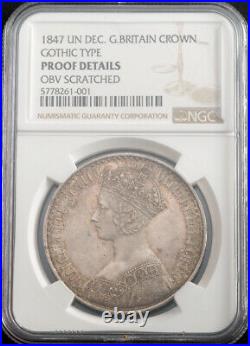 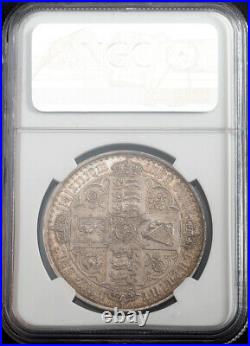 Legend: TUEATUR UNITA DEUS ANNO DOM MDCCCXLVII. May God guard these United (Kingdoms) in the year of our Lord 1847! The British crown , the successor to the English crown and the Scottish dollar, came into being with the Union of the kingdoms of England and Scotland in 1707. As with the English coin, its value was five shillings. The Queen Victoria "Gothic" crown of 1847 (with a mintage of just 8,000 and produced to celebrate the Gothic revival) is considered by many to be the most beautiful British coin ever minted.

Victoria (Alexandrina Victoria; 24 May 1819 22 January 1901) was from 20 June 1837 the Queen of the United Kingdom of Great Britain and Ireland and from 1 May 1876 the first Empress of India until her death. Her reign as Queen lasted 63 years and seven months, longer than that of any other British monarch to date. The period centred on her reign is known as the Victorian era. Though Victoria ascended the throne at a time when the United Kingdom was already an established constitutional monarchy in which the king or queen held few political powers, she still served as a very important symbolic figure of her time. The Victorian era represented the height of the Industrial Revolution, a period of significant social, economic, and technological progress in the United Kingdom.

Victoria's reign was marked by a great expansion of the British Empire; during this period it reached its zenith, becoming the foremost global power of the time. Victoria, who was of almost entirely German descent, was the granddaughter of George III and the niece of her predecessor William IV. She arranged marriages for her nine children and forty-two grandchildren across the continent, tying Europe together; this earned her the nickname "the grandmother of Europe".

She was the last British monarch of the House of Hanover; her son King Edward VII belonged to the House of Saxe-Coburg and Gotha. Through her mother, she was also a first cousin twice removed of Maria Theresa, Holy Roman Empress. The item "1847, Great Britain, Queen Victoria. Rare Proof Silver Gothic Crown. NGC PF+" is in sale since Thursday, January 28, 2021.

This item is in the category "Coins & Paper Money\Coins\ World\Europe\UK (Great Britain)\Crown". The seller is "coinworldtv" and is located in Wien.