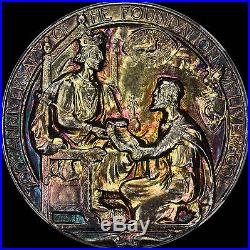 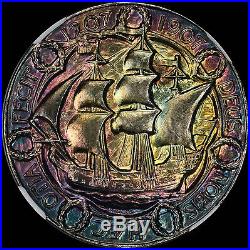 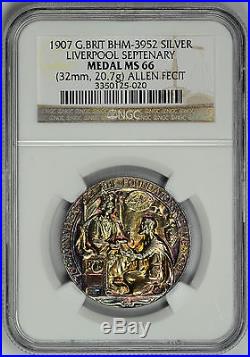 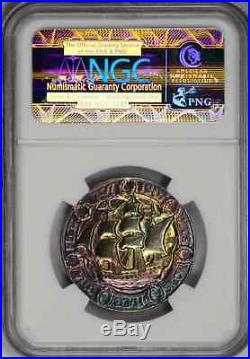 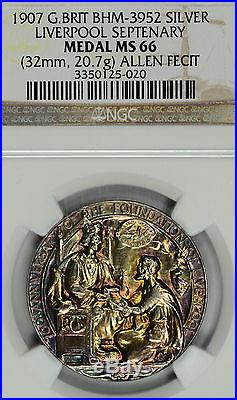 A MASTER OF ART AND SCULPTURE, CHARLES JOHN (CJ) ALLEN CREATED THE DIES FOR THIS PIECE IN 1907 IN HONOR AND PREPERATION FOR THE LIVERPOOL SEPTENARY PAGEANT CELEBRATING THE 700TH YEAR OF THE FOUNDING OF LIVERPOOL. THIS IS AN HISTORIC AND GORGEOUS SPECIMEN THAT SIR PAUL McCARTNEY OR QUEEN ELIZABETH WOULD BE PROUD TO OWN. The Directors of the Institute and School of Art passed responsibility to the City in 1905.

In 1905 CJ Allen the creator of the Victoria Monument in Derby Square began teaching at the School. Allen is chosen to design the dies for the Liverpool Septenary Medal. The School was amalgamated with Liverpool University to form a single City School of Art. This'University Art School' had appointed to its staff, the young Augustus John. In 1956 Stuart Sutcliffe enrolls at Liverpool College of Art (same school, with name revisions).

In 1956 Nicholas Horsfield teaches at the college where he became an important member of the Merseyside art scene. In 1957 John Lennon and Liverpool born sculptor, and future Royal Academician, Michael Kenny enrol at Liverpool College of Art. At this time the School had approximately 2000 students enrolled. In 1960 Sutcliffe and Lennon rename the group The Silver Beatles. Sutcliffe later changed the name to The Beatals and Lennon later changed the spelling. In 1960 Lennon and Sutcliffe leave the College of Art and travel to Hamburg with The Beatles. Liverpudlian promoter Charlie'Mac' McBain held regular skiffle and rock events at his venues.

On Friday 18 October 1957 he ran one such event, at the New Clubmoor Hall in Norris Green, Liverpool. It was the first show in which Paul McCartney appeared onstage with the Quarrymen. ABSOLUTELY THE MOST STUNNING ORIGINAL TONING WE HAVE SEEN ON ANY MEDAL, AND WE HAVE SEEN A LOT OF MEDALS! OBVERSE : KING JOHN OF ENGLAND SEATED IN THE YEAR 1207, HANDING THE CHARTER CREATING THE BEGINNINGS OF LIVERPOOL TO THE KNEELING STEWARD OF WEST DERBY.

Inscriptions : 700TH ANNIVERSARY OF THE FOUNDATION OF LIVERPOOL, C. DEUS NOBIS HAEC OTIA FECIT 1207 1907, C. Liverpools official history starts on the 28th August 1207, when King John founded the area of Liuerpul granting it the status as an official town in his Royal Charter. The Charter meant a great deal to the small village and people living there. King John invited people to come and live in the area as they could now rent a house and a piece of land to grow things. The Charter meant that the area was being helped to develop there would be a market day established there, and this helped to bring tradesmen in once a week. There was a court to sort out problems, and a ferry to take people across the River Mersey. King John himself saw Liverpool as an ideal place to form a base for his ships to invade Ireland and Wales from. He built a Castle in the area that we now call Castle Street, and in fact the village of Liverpool was only made up of seven streets in this area. Many of these streets survive today; They were Dale Street, Castle Street, Chapel Street, Moor Street (now Tithebarn Street), Bancke Street (now Water Street), Peppard Street (Old Hall Street) and Juggler Street (High Street). Maybe only 100 or 200 people lived in Liverpool at this time. MANY MORE REALLY COOL & HISTORIC NUMISMATIC OFFERINGS.. The item "1907 LIVERPOOL ENGLAND 700 YR NGC MS66 GREAT BRITAIN TONED FINEST KNOWN UK" is in sale since Saturday, February 08, 2014.

This item is in the category "Coins & Paper Money\Coins\ World\Europe\UK (Great Britain)\Commemorative". The seller is "goodrichcc" and is located in California. This item can be shipped to United States.