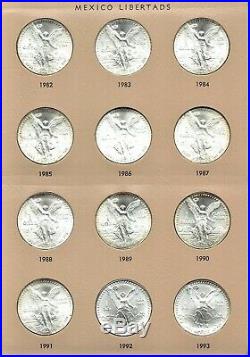 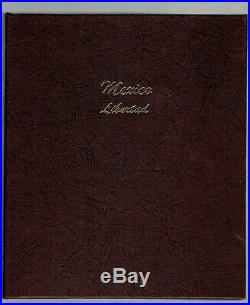 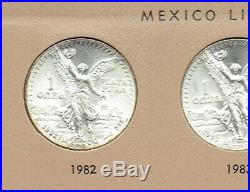 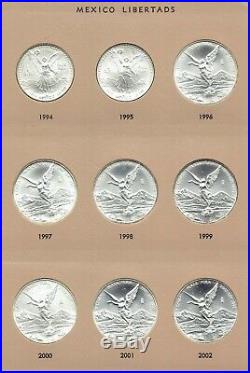 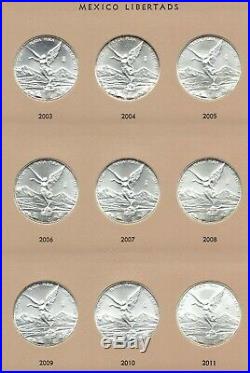 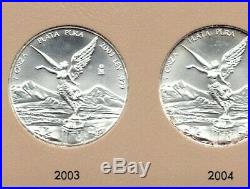 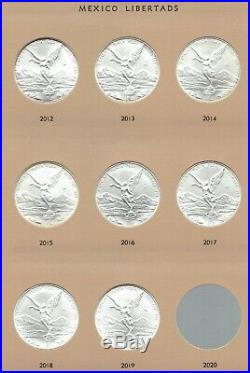 The coins were first issued in 1982 as one ounce. 999 fine silver bullion coins. Over the years, the range has been expanded to include both smaller and larger sized coins as well as proof versions for collectors. The original obverse design for the series featured winged Victoria from the Mexican Independence Victory Column before a landscape containing the volcanoes Popocatépetl and Iztaccihuatl. The reverse featured the Coat of Arms of Mexico depicting a golden eagle perched on a prickly pear cactus and devouring a snake, symbolizing the triumph of good over evil.

The second and current design for the series introduced in 1996 features a different view of winged Victoria with the two volcanoes still appearing prominently in the background. On the reverse, the central Coat of Arms of Mexico was reduced in size so that the historical costs of arms could appear surrounding.

The full range of seven sizes continues to be produced for new issues. The production of proof versions for collectors began in 1983 with the offer of a limited mintage prof set. Regular one ounce proof coins began to be issued in 1986. In 1992, the four smaller sizes were added to the proof range. In 1996, the two larger sizes were added.

From 2002 to present, a proof like 1 kilogram sized coin has also been offered They can be a vehicle for silver bullion investment as well as an item with numismatic appeal. The design is among the most beautiful for world silver bullion coins and mintage levels are amongst the lowest. Special sets provide some variety and additional pieces for the collector to pursue. The Mexican Silver Libertads have relatively small mintages compared to other world bullion coins.

The highest mintages occur for just two years when production exceeded the two million mark for the most popular one ounce size. Significant mintage lows were recorded in 1998 and 1999 when production levels dropped considerably across all sized coins. Although the one ounce size would never revisit these lows, the smaller sized coins hit even lower mintage levels in 2007 before rebounding in more recent years. Ideal for the Mexico coinage or silver collector/investor.

A GREAT hedge against inflation. We are members of the American Philatelic Society (APS), American Numismatic Association (ANA), SSDC, and other professional numismatic and philatelic societies. Lake Forest Stamp and Coins.

0.999 Fine Silver GEM BU" is in sale since Friday, July 5, 2019. This item is in the category "Coins & Paper Money\Coins\ World\North & Central America\Mexico\Mexico (1905-Now)". The seller is "jacklfcoins" and is located in Lake Forest, Illinois. This item can be shipped to United States.