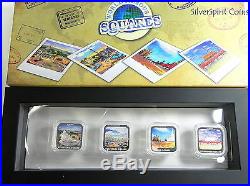 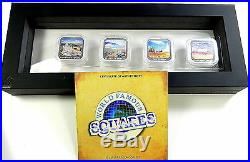 The open space which lies before the basilica was redesigned by Gian Lorenzo Bernini from 1656 to 1667, under the direction of Pope Alexander VII. At the centre of the square stands an Egyptian obelisk, supported on bronze lions and surmounted by the bronze Chigi arms. In 1817, circular stones were fixed to mark the obelisk's shadow at midday, making the obelisk a giant sundial's gnomon.

The square is viewed as a focal point for ceremonial Papal appearances and as an iconic historical landmark. TRAFALGAR SQUARE COIN Trafalgar Square is a square in central London, England.

The square is named for The Battle of Trafalgar (1805) after Lord Nelson's famous naval victory. At its centre is Nelson's Column, which is guarded by four lion statues at its base. A fountain, statues and sculptures are an important aspect to the square, including a fourth plinth displaying changing pieces of contemporary art. In the 1820's, the Prince Regent engaged the landscape architect John Nash to redevelop the area. The present architecture of the square was developed by Sir Charles Barry and was completed in 1845.

RED SQUARE COIN Red Square is an iconic city square in Moscow. The square separates the Kremlin, the former Royal citadel and currently the official residence of the President of Russia, from a historic merchant quarter known as Kitai-gorod.

As the major streets of Moscow radiate from Red Square in all directions, it is often considered the focal point of Moscow and all of Russia. Red Square has enjoyed a fascinating and tumultuous history and boasts some of the world's most photographed buildings. The Square once served as Moscow's main market place and was also used for various public ceremonies and proclamations, and in some instances, as the site of coronation for Russia's czars. The Square has been gradually developed over time and has been used for official and military ceremonies by all Russian governments since it was established. It is an important cultural, historical and tourist landmark.

TIANANMEN SQUARE COIN Tiananmen Square is a large city square in the centre of Beijing, China. The Square lies between two impressive ancient gates, the Tiananmen to the north and the Zhengyangmen or Qianmen to the south. Tiananmen Square has a history dating back to the fifteenth century, and has been enlarged over time.

Along the west side of the Square is the Great Hall of the People, while the east side encompasses the National Museum of China. The Square's flatness is contrasted by the 38-metre high Monument to the People's Heroes and the Mausoleum of Mao Zedong. Chang'an Avenue, which is used for parades, lies between the Tiananmen Gate and the tree-lined Square. The urban context of the Square was altered in the 1990s with the construction of the National Grand Theatre in its vicinity and the expansion of the National Museum. This historic landmark has great cultural significance and has been the site of several important events in Chinese history. We carry mainly coins from the decimal era 1966 onwards and present a wide variety of both silver and base metal coins. Bitcoin and other Cryptos, just message for addresses. We offer a 5% discount if paying with Bitcoin or other Cryptos. This listing is currently undergoing maintenance, we apologise for any inconvenience caused. The item "2013 WORLD FAMOUS SQUARES Four Coin Set Silver Coin Collection" is in sale since Friday, December 11, 2015.

This item is in the category "Coins\Coins\Australian\Decimal". The seller is "silverspiritcoins" and is located in Bowral, NSW.