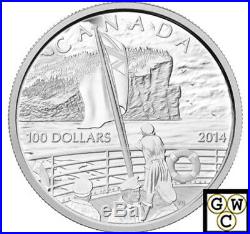 Designed by Canadian artist Yves Bérubé, the reverse image captures a poignant moment as a departing soldier takes one last look at the Canadian coastline. It is October 1914 and the SS Megantic is among the ships transporting the first Canadian troops to British soil in the early days of the First World War. One soldier is leaning against the stern? S guard rail, his back momentarily turned on his shipmates who have gathered on the deck.

Sadly, this sight would prove to be the last glimpse of Canada for many of its brave soldiers, whose personal sacrifices during the war would do much to shape the nation. The design commemorates the 100th anniversary of the declaration of the First World War. The reverse image is an emotional tribute to those who left their homeland? To serve as part of the First Contingent of the Canadian Expeditionary Force.

A rear view offers viewers the same sights as the pensive soldier, thereby immersing them in the moment as though they, too, were peering at their homeland for what could be the last time. Composition 99.99% fine silver. Packaging Maple presentation case with black beauty box.

This item can be shipped to Canada, United States.