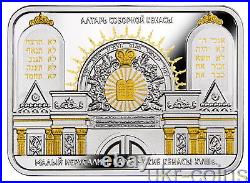 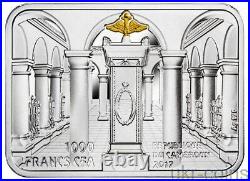 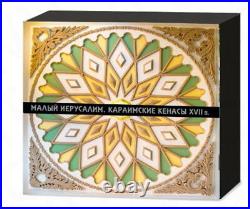 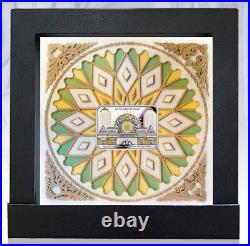 This coin is Brand new - comes with the luxury mint packaging (display box, outer box, Certificate of Authenticity). Ken esa is the term for an East European Karaite or Persian synagogue. The word derives from the Aramaic word for "assembly" (in Hebrew, the word for synagogue is beit knesset).

The kenesa has been a centre of the religious life of the Karaites of Yevpatoria since 1837. Yevpatoria is an ancient city was built by Greek colonists around 500 BC. It's a small coastal city where Tatars, Karaites, Othodox Jews, Turks, Greeks, Armenians lived in peace for many centuries.

The city's religious buildings include three Karaite kenesas, two Jewish synagogues, a dozen mosques, a Mevlevi Dervish monastery, an Armenian Apostolic Church, an Armenian Catholic church and a Greek Orthodox Church - all in close proximity. Because of its unique ethnic and religious diversity this area is known as "Little Jerusalem".

Great gift and fantastic collector's item. We are professional coin dealer and sell world coins over 20 years. Take a look at my other lots maybe you will find something that interests you. This item is in the category "Coins & Paper Money\Coins: World\Commemorative".

The seller is "ukr-coins" and is located in this country: US. This item can be shipped to United States.