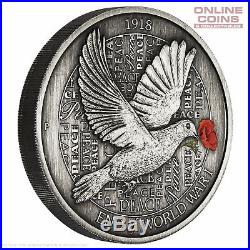 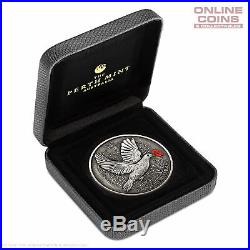 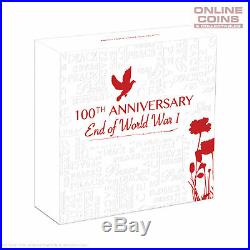 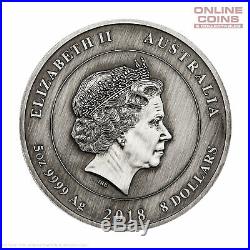 2018 Perth Mint 100th Anniversary End of World War I - 5oz Silver Antiqued Coin. This beautiful silver coin commemorates the centenary of the Armistice in 1918. Signed between France, Britain and Germany in a railway carriage in the Forest of Compiègne north of Paris, the Armistice implemented a ceasefire at the 11th hour of the 11th day of the 11th month.

The Treaty of Versailles, which formally ended the war, was then signed on 28 June 1919. Struck by The Perth Mint from 99.99% pure silver, each coin is issued as legal tender under the Australian Currency Act 1965. The 5oz silver coin has been individually antiqued to give it a unique finish conveying the surface abrasions of an ancient artefact. As a result of this treatment, the appearance of the coin may vary. Maximum mintage of 500 only.

Featured on each coins reverse is a dove, a bird which has for millennia represented peace, holding in its beak a red poppy. Poppies were the first flowers to bloom in the devastated battlefields of Western Europe and soon became widely accepted as the symbol of remembrance.

In the background is the word peace struck in different fonts, the inscription 1918 END of WORLD WAR I and The Perth Mints traditional P mintmark. Each coins obverse depicts the Ian Rank-Broadley effigy of Her Majesty Queen Elizabeth II, the 2018 year-date and the monetary denomination. The coin is housed in a display case, within a themed shipper and accompanied by a numbered Certificate of Authenticity. Any questions please do not hesitate to ask. The item "2018 Perth Mint 100th Anniversary End of World War I 5oz Silver Antiqued Coin" is in sale since Monday, August 6, 2018.

This item is in the category "Coins\Coins\Australian\Decimal". The seller is "onlinecoinslismore" and is located in LISMORE, New South Wales. This item can be shipped to Australia, North, South, or Latin America, all countries in Europe, all countries in continental Asia, New Zealand.