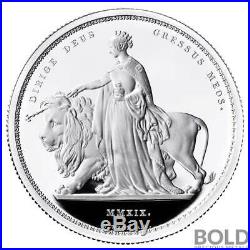 The Great Engravers series is truly a timely and important window into a period when the strength of regal beauty reigned in the coinage produced by the nations of the world. The great engravers of legal tender coinage of the past painstakingly produced timeless masterpieces no less important to world history than those of the master painters and sculptors of their period. This 2019 UK Great Engravers Una and the Lion 2 oz Silver is a perfect introduction to the master engravers of past ages. BOLD highly recommends that you explore the proven master engravers that set the original benchmarks of design excellence. This fine new series is introduced by the Royal Mint. Starting with William Wyon, The Great Engravers Collection is a new series from The Royal Mint celebrating some of the most iconic coin designs in numismatic history. Una and the Lion, created by William Wyon, is the first design to feature in the collection and is widely considered one of the world's most beautiful designs. For this collection the design has been remastered from an original die for modern striking techniques and it's a fitting place to start this journey through the past.

Chief Engraver at The Royal Mint from 1828 until his death 1851, William Wyon was as talented as he was prolific, leaving a legacy few can rival, and his Una and the Lion is a design that stands out above all others. Struck to commemorate the start of Queen Victoria's reign in 1837, the design casts the young queen in the role of Una, while the lion she leads represents the British people.

Aside from his Una and the Lion, Wyon's notable works include his romantic take on St George and the dragon for Prince Albert's personal medal of 1845, the magnificent Gothic crown featuring a medieval-style portrait of Queen Victoria, introduced in 1847, and the commemorative medal designed for the Great Exhibition of 1851. This stunning 2019 UK Great Engravers Una and the Lion 2 oz Silver is a fitting reintroduction to past design and engraving excellence that set the benchmark for the master-craft of coinage design and production. This piece is worthy of your full attention! Inaugural release of new limited mintage series produced by the Royal Mint.

Each coin arrives in an attractive box and includes a fine booklet. Obverse displays the fine effigy of Queen Elizabeth II produced by Jody Clark.

Inscriptions encircling the rim include, ELIZABETH II. Reverse features the timeless beauty of the original 1839 release depicting the young Queen Victoria as Una, the lead character in the legendary poem by Edmund Spenser, "The Faerie Queen" (1590), an ancient poem, which is certainly an enjoyable read, particularly as the characters were selected as the basis for the coin's design. Legal Tender face value of 5 Pounds. The item "2019 Britain Great Engravers Una and the Lion 2 oz Silver Proof" is in sale since Monday, November 25, 2019. This item is in the category "Coins & Paper Money\Coins\ World\Europe\UK (Great Britain)\Other UK Coins".

The seller is "boldpreciousmetals" and is located in Austin, Texas. This item can be shipped to United States, Canada, Australia, New Zealand.