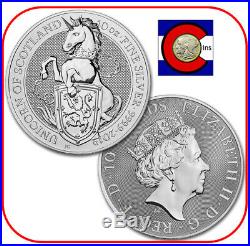 2019 Queen's Beasts Unicorn of Scotland 10 oz 0.9999 Silver. Coins in Mint shape - have never left Mint capsules. The fourth coin in the Queen's Beast series, the 2018 Unicorn of Scotland. An enduring symbol of strength and beauty and its easy to see how the unicorn came to be used in heraldry. It first appeared on Scottish heraldry in the twelfth century, after William I created an early form of the Scottish coat of arms.

James I of England, who united the English and Scottish thrones, chose the Scottish Unicorn to join the Lion of England to support the Royal Arms. They have supported this shield, which symbolizes the sovereignty of Her Majesty The Queen and represents the unity of the United Kingdom, ever since. At the coronation of Her Majesty The Queen, ten heraldic beasts stood guard.

The Queens Beasts, sculpted by James Woodford RA for the coronation ceremony held in Westminster Abbey in 1953, stand six feet tall. The heraldic creatures symbolized the various strands of royal ancestry brought together in a young woman about to be crowned queen. Each proud beast, used as a heraldic badge by generations that went before her, was inspired by the Kings Beasts of Henry VIII that still line the bridge over the moat at his Hampton Court Palace. Mintage is to be determined. The item "2019 Queen's Beast Unicorn of Scotland 10 oz Silver UK Coin in Mint capsule" is in sale since Thursday, September 12, 2019.