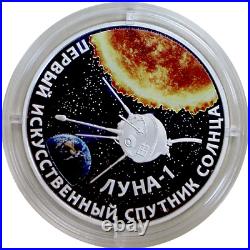 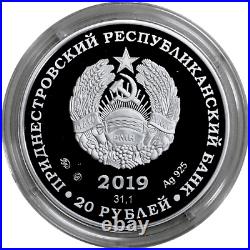 The 60th anniversary of the launch of the. First artificial satellite of the Sun. " Space Exploration series" coin series. Weight (fine metal content): 31.1 g. Minted by the Moscow Mint, Russia.

Luna 1 was launched at 16:41 GMT (22:41 local time) on 2 January 1959 from Site 1/5 at the Baikonur Cosmodrome by a Luna 8K72 rocket. Luna 1 became the first man-made object to reach the escape velocity of the Earth, along with its carrier rocket's 1,472-kilogram (3,245 lb) upper stage, which it separated from after achieving heliocentric orbit.

Due to a programming error, the duration of the upper stage's burn was incorrect, and consequently Luna 1 failed to impact the Moon. The spacecraft passed within 5,995 kilometres (3,725 mi) of the Moon's surface on 4 January after 34 hours of flight. It remains in orbit around the Sun, between the orbits of Earth and Mars. BEAUTIFUL GIFT AND INCREDIBLE COLLECTOR'S ITEM!

We are professional coin dealer and sell world coins over 20 years. Take a look at my other lots maybe you will find something that interests you.

This item is in the category "Coins & Paper Money\Coins: World\Commemorative". The seller is "ukr-coins" and is located in this country: US. This item can be shipped to United States.