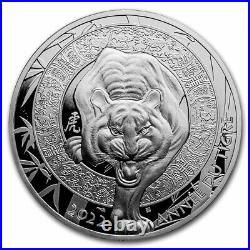 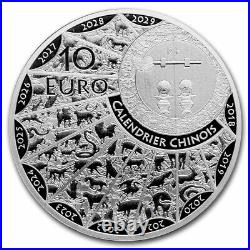 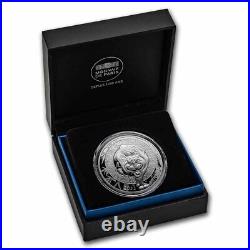 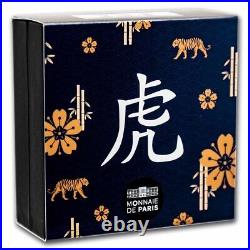 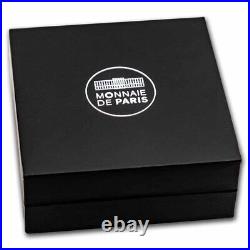 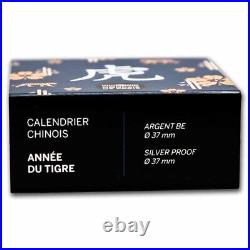 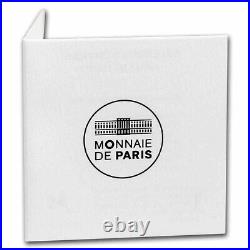 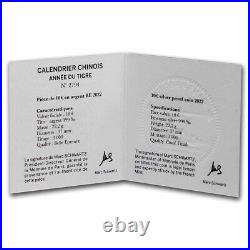 Photos in this listing may or may not be stock photos. The photos are meant to be an indication of the product you will receive. Comes in a box and with a certificate of authenticity from the Monnaie de Paris. Mintage of 3,000 coins. Obverse: A fierce tiger is depicted coming through the door shown in the reverse of the coin, surrounded by a circle of traditional Chinese motifs.

The ideogram of the Tiger appears on the left of its representation and was calligraphed by Xian Ying Hong. The Yeardate and the description Year of The Tiger appear at the bottom of the design. Reverse: Shows all of the animals in the Chinese zodiac. They are featured on a screen surrounding a traditional Chinese temple door. Certified by the Monnaie de Paris.

Protect your Monnaie de Paris capsules from fingerprints by adding these cotton gloves. This Silver coin would be a great addition to any collection or an ideal gift for a loved one. The Lunar Calendar The Chinese calendar is one of the oldest in the world and is based off of the sun and moon. Months are set according to the moon. For example, the first day of each month is the new moon and the 15th day is the full moon.

Because the solar year counts 12 lunar months plus a dozen days, seven intercalary months are added over each 19 years in order for the calendar year to stay within a solar year. According to Chinese tradition, the first calendar system was created by the Yellow Emperor in 2637 BC. The Gregorian calendar was officially adopted by the PRC in 1912, then extended to the whole state in 1929. New Year is between January 20th and February 21st each year.

Chinese signs of the zodiac include the Rat, Ox, Tiger, Rabbit, Dragon, Snake, Horse, Goat, Monkey, Rooster, Dog and the Pig. Each animal is a symbolizes personality traits of people born during the sign. Check out our great collection of Lunar Silver Rounds.

1,359 Item as described. Rec'd item, looking forward to doing business with again. This item is in the category "Coins & Paper Money\Coins: World\Europe\France". The seller is "apmex" and is located in this country: US.