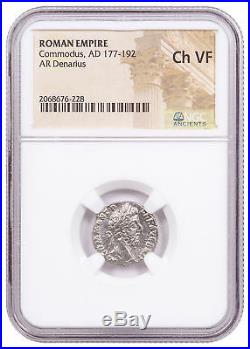 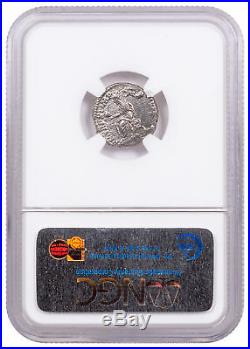 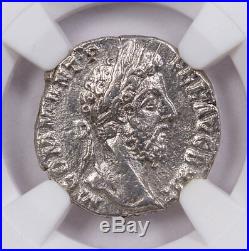 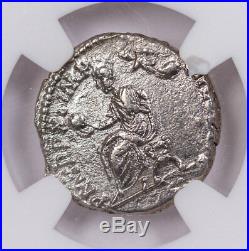 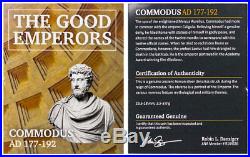 Believing himself to be a demi-god, Commodus positioned statues of himself portrayed as Hercules throughout the empire and renamed the city of Rome to be Commodiana. Roman legions became Commodianae, the Senate retitled the Commodian Fortunate Senate, and the months were renamed with Commodus' twelve names: Lucius, Aelius, Aurelius, Commodus, Augustus, Herculeus, Romanus, Exsuperatorius, Amazonius, Invictus, Felix, and Pius.

Commodus' megalomaniac behavior led to his assassination in late AD 192, immediately followed by the restoration of Rome and its institutions by the Senate. This approximately 18 mm diameter Silver Denarius was struck in Rome during the reign of Commodus.

The image of Commodus also appears on the reverse, seated in a curule chair holding a globe, being crowned by a flying Victory from behind, accompanied by a partially clipped inscription declaring the titles held by the emperor. Stunning Ancient Coin in Choice Very Fine Condition. This Silver Denarius of Commodus, struck AD 177-192, is graded Choice Very Fine (Sheldon Scale equivalent of 30-35) by NGC Ancients, the ancient coin grading division of the Numismatic Guaranty Corporation.

The coin will exhibit virtually complete details, with the highest design elements worn flat. This remarkable treasure from the Roman Empire belongs in your collection now! Specifications for this AD 177-192 Roman Empire Silver Denarius of Commodus NGC Ch. We cannot make any price adjustments after the sale is complete.

Product Photo Policy: MCM attempts to display product images shown on the site as accurately as possible. We take all of our photos in house and due to reflections on the mirrored or proof surfaces of a coin there may appear to be'black' when there is not. If a coin has a color on it at all it will be described as'colorized' in the description or title. Due to the large inventory we sell, we use stock photos. Serial numbers will vary from the image shown unless specifically stated in the product listing that the item pictured is the item you will receive.

INTERNATIONAL ORDERS POLICY: We are accepting international orders from select countries. These charges are the customer's responsibility.

However, we cannot guarantee this due to the volume of orders we process each day. Beyond the 30-day return period, Company is under no obligation to accept return of any product, but may in its discretion do so pursuant to this policy, for up to one year from the invoice date. ModernCoinMart (MCM) was launched in 2004 and quickly set the standards for online sales of bullion, US coins and world coins. Join over 100,000 loyal customers and feel confident purchasing from a company that's spent a decade building a solid and stellar reputation trusted and recognized around the world.