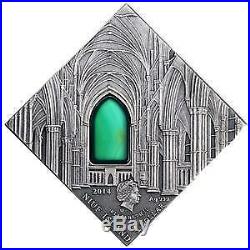 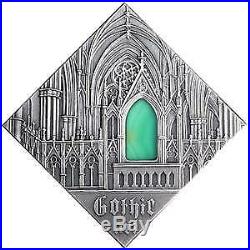 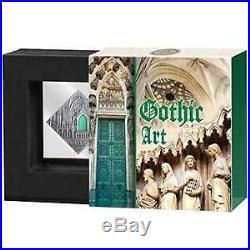 Gothic style originated approximately in 1120. In the early stages of its existence Gothic art developed in France.

Later, around 1175, it continued to flourish in England. Gothic buildings are characterized by great lightness, numerous windows, usually stained-glass ones, soaring towers and lavishly ornamented portals.

Other characteristic features of Gothic architecture include the use of pointed arches, cross-ribbed vaults and flying buttresses. The high value of the coin is emphasized by its uncommon shape, one and only theme and a great deal of decorations in the form of ornamental motifs enriched by a natural agate insert. Due to the Gothic design and discreet decorations, forming a whole structure with an unusual expression and lightness the coin will take you to the world of the medieval art of 12th -16th century. The reverse features the main nave of the Cathedral Church of the Blessed Virgin Mary of Lincoln.

The front part of the nave is embellished with a green agate insert. In the lower part of the coin a miniature profile portrait of Her Majesty Queen Elizabeth II and inscriptions: 2014 (the year of issue), NIUE ISLAND (the issuer), ELIZABETH II, 1 DOLLAR (the face value).

The obverse depicts the chancel of the Cathedral Church of the Blessed Virgin Mary of Lincoln. The tabernacle is decorated with an insert made of green agate. In the lower part of the coin an inscription: GOTHIC ART (the name of the coin).

The item "Art That Changed The World Series Gothic Niue 2014 Silver Coin" is in sale since Monday, March 9, 2020. This item is in the category "Coins & Paper Money\Coins\ World\Australia & Oceania\Other Oceania Coins".

The seller is "tradezone212" and is located in New York, New York. This item can be shipped worldwide.