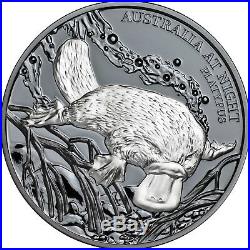 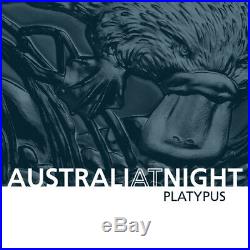 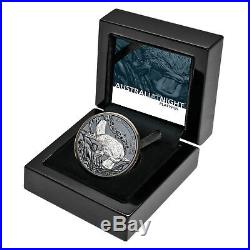 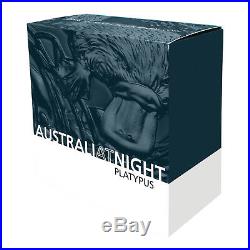 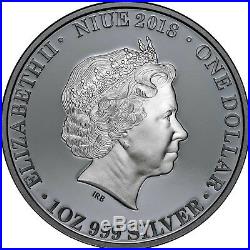 FIRST COIN IN A NEW SERIES - Australia at Night Pure Silver Black Proofs! First up is the bizarre Duck-Billed Platypus, struck in one troy ounce of pure silver, with a proprietary black treatment to simulate its dark, nocturnal world! Platypuses are amazing creatures, found only in Australia. They live beside freshwater rivers and lakes, where they create burrows for shelter and protection. Nocturnal creatures, they are most active at night.

The platypus has a number of different Aboriginal names, including boondaburra, mallingong and tambreet. In traditional Australian culture, the platypus occupies a very special, almost sacred, role, and is one of the few animals that it is considered taboo to hunt or eat.

This low mintage, one troy ounce pure silver proof sports a proprietary black treatment to make the platypus look like it's swimming through its riverine habitat at night. We believe that the black treatment may be rhodium plating - but the mint won't confirm!

The total mintage is just 1,000! Get in on the ground floor now with this first this new series, Australia at Night! The bizarre appearance of this egg-laying, venomous, duck-billed, beaver-tailed, otter-footed mammal baffled European naturalists when they saw the first specimens from Australia - some even considered it an elaborate hoax! It is one of the few venomous mammals - the male platypus has a spur on the hind foot that delivers a venom capable of causing severe pain to humans. The unique features of the platypus make it an important subject in the study of evolutionary biology and a recognizable and iconic symbol of Australia; it has appeared as a mascot at national events and is featured on the reverse of the Australian 20 cent coin. The platypus is the animal emblem of the state of New South Wales. Is a semi-aquatic mammal endemic to eastern Australia, including Tasmania. Together with the four species of echidna, it is one of the five extant species of monotremes, the only mammals that lay eggs instead of giving birth to live young.

It is the sole living representative of its family. , though a number of related species have been found in the fossil record.

Until the early 20th century they platypus was hunted for its fur, but it is now protected throughout its range. Although captive breeding programs have had only limited success and the platypus is vulnerable to the effects of pollution, it is not under any immediate threat. The platypus has a number of different Aboriginal names, including. A large, adult platypus dives to forage in its native riverine habitat.

The scene sports a proprietary black treatment to simulate the nighttime, when the nocturnal platypus is most active. The legends AUSTRALIA AT NIGHT and PLATYPUS denote the theme. Her Majesty, Queen Elizabeth II, in crowned profile facing right. This portrait, featuring Her Majesty wearing a tiara and pearl drop earrings, was executed by the sculptor Ian Rank Broadley. The legend ELIZABETH II, the date of issue and denomination also appear, while the legend 1 OZ 999 SILVER guarantees the weight and purity.

The coin is encapsulated inside a luxurious clamshell-style presentation case, lined with black velvet and satin, and protected by an outer cardboard box. An individually-numbered certificate of authenticity is included. Proof with Proprietary Black Treatment. The item "Niue 2018 Australia at Night Nocturnal Duck Billed Platypus $1 Silver Black Prf" is in sale since Thursday, May 31, 2018. This item is in the category "Coins & Paper Money\Coins\ World\Australia & Oceania\Australia\Commemorative".