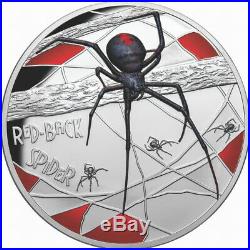 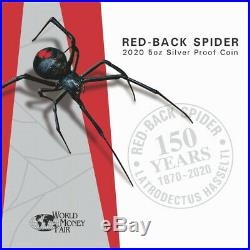 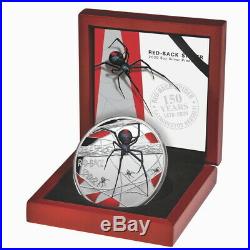 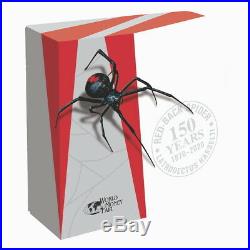 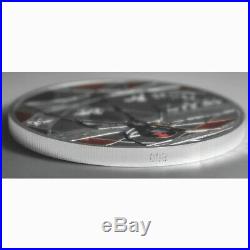 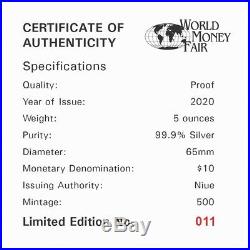 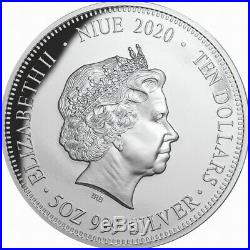 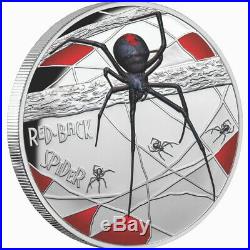 Design, CRAZY LOW MINTAGE (just 500), vivid color and one of. Deadliest (and most dangerous) creatures, the venomous Red-Back Spider. All make this HUGE 5 troy ounce pure silver proof the one to get! First of its kind - the first-ever Deadly & Dangerous 5 Oz Silver Proof! The intriguing Deadly & Dangerous Series pairs ridiculously low mintage limits with vibrant, dynamic designs. This five full troy ounce pure silver proof finish coin portrays the distinctly deadly Aussie Red-Back Spider in glorious, full color, set in its natural environment! Dangerous denizens from Down Under before they get away for good! Mintage just 500 - get yours now or forever hold your peace! Australia's highly venomous Red-Back Spider has an easily recognizable red stripe on its abdomen. By Swedish arachnologist Taerian Thorell in 1870, 150 years ago. Australia's Venomous Red-Back Spider. , also known as the Australian black widow, is a species of highly venomous spider believed to originate in the South Australian or adjacent Western Australian deserts, but now found throughout Australia, Southeast Asia and New Zealand, with colonies elsewhere outside Australia. It is a member of the cosmopolitan genus.

The adult female is easily recognized by her spherical black body with a prominent red stripe on the upper side of her abdomen and an hourglass-shaped red/orange streak on the underside. Females usually have a body length of about 10 millimeters (0.4 in), while the male is much smaller, being only 34 mm (0.120.16 in) long. Mainly nocturnal, the female redback lives in an untidy web in a warm sheltered location, commonly near or inside human residences.

It preys on insects, spiders and small vertebrates that become ensnared in its web. It kills its prey by injecting a complex venom through its two fangs when it bites, before wrapping them in silk and sucking out the liquefied insides. Often, it first squirts its victim with what resembles'super glue' from its spinnerets, immobilizing the prey by sticking the victim's limbs and appendages to its own body. The redback spider then trusses the victim with silk.

Once its prey is restrained, it is bitten repeatedly on the head, body and leg segments and is then hauled back to the redback spider's retreat. Sometimes a potentially dangerous victim can be left to struggle for hours until it is exhausted enough to approach safely. Male spiders and spiderlings often live on the periphery of the female spiders' web and steal leftovers.

The redback is one of the few spider species that can be seriously harmful to humans, and its liking for habitats in built structures has led it to being responsible for a large number of serious spider bites in Australia. Predominantly neurotoxic to vertebrates, the venom gives rise to the syndrome of latrodectism in humans.

This starts with pain around the bite site, which typically becomes severe and progresses up the bitten limb and persists for over 24 hours. Sweating in localized patches of skin occasionally occurs and is highly indicative of latrodectism. Generalized symptoms of nausea, vomiting, headache, and agitation may also occur and indicate severe envenomation. An antivenom has been available since 1956.

A full color, realistic portrait of a large adult female red-back spider and three juvenile spiderlings in their web. The legend RED-BACK SPIDER defines the theme. Her Majesty, Queen Elizabeth II, in crowned profile facing right. This portrait, featuring Her Majesty wearing a tiara and pearl drop earrings, was executed by the sculptor Raphael Maklouf.

The legend ELIZABETH II, the date of issue and denomination also appear, while the legend 5 OZ 999 SILVER guarantees the weight and purity. The coin is encapsulated inside a highly polished, solid wood, clamshell-style presentation case, lined with black velvet and protected by a full color outer box. An individually-numbered certificate of authenticity is included. Images of the edge numbering and certificate are mint-supplied and intended for general reference only.

Serial numbers on images are NOT indicative of the serial number you will receive! Serrated (milled, reeded) with Serial Number Edge Lettering.

Niue is a small island nation in the South Pacific. Although it is completely self-governing and independent, it remains in free association with New Zealand, a member of the British Commonwealth of Nations, hence the portrait of Her Majesty Queen Elizabeth II on its coinage. The country is located about 1,450 miles northeast of New Zealand. It is closest to Samoa, Tonga, and the Cook Islands.

It is one of the largest coral islands in the world, with a total area of 260 square kilometers. Niueans are predominantly Polynesian; most are bilingual, speaking both Niuean and English.

The item "Niue 2020 Red-Back Spider Deadly $10 5 Troy Oz Pure Silver Color Proof FULL OGP" is in sale since Wednesday, January 29, 2020. This item is in the category "Coins & Paper Money\Coins\ World\Australia & Oceania\Australia\Commemorative". The seller is "talismancoins" and is located in Saint Louis, Missouri. This item can be shipped worldwide.