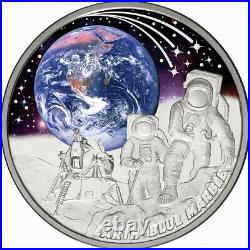 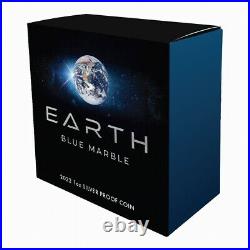 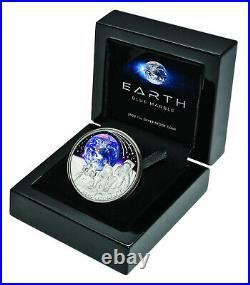 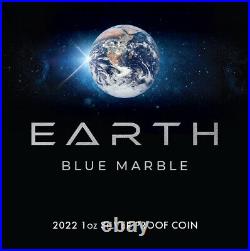 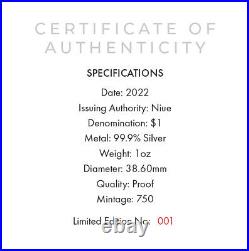 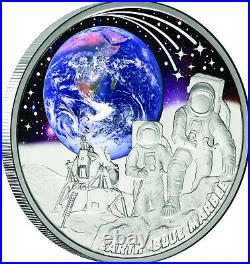 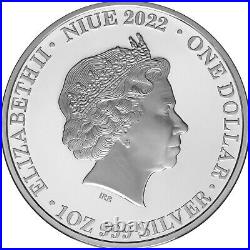 The iconic color photo of Earth taken by the Apollo 17 astronauts in 1972, in vibrant full color on this ultra-low-mintage (just 750) pure silver frosted cameo proof! Don't miss out, make this stunning numismatic rarity yours today! Fifty years ago, in 1972, NASA launched its final manned mission to the moon, Apollo 17.

On the way there, the astronauts snapped the famous photo. Arguably the most reproduced photo in history. Was also the first image of Earth fully illuminated and relatively cloud-free ever taken.

In the foreground the astronauts of Apollo 17, complete with cameras, explore the surface of the moon in front their lunar lander module. With a total mintage of only 750, don't delay, make this incredibly beautiful pure silver proof yours today! The three shooting stars above the Earth represent the three Apollo 17 astronauts, who were the last to reach the moon: Eugene Cernan, Mission Commander Harrison Schmitt, Lunar Module Pilot Ronald Evans, Command Module Pilot The coin depicts Cernan and Schmitt on the lunar surface; Evans remained aloft, in orbit, in the command module.

Is a photographic image of Earth taken on December 7, 1972, by the Apollo 17 crew Harrison Schmitt and Ron Evans from a distance of about 18,000 miles (29,000 kilometers) above the planet's surface. It was taken by the crew of the Apollo 17 spacecraft on its way to the Moon, and is one of, if not. Most reproduced images in history. The photo mainly shows the Earth from the Mediterranean Sea south to Antarctica. This was the first time an Apollo mission trajectory made it possible to photograph the south polar ice cap. In addition to the Arabian Peninsula and Madagascar, almost the entire coastline of Africa is clearly visible. The Asian mainland is on the horizon to the north and east.

The image is one of the few to show an almost fully illuminated Earth as the astronauts had the Sun behind them when they took the image. To the astronauts, the slightly gibbous Earth had the appearance and size of a glass marble, hence the name.

It has been mostly shown with Antarctica at the bottom, although the actual view the astronauts had was with Antarctica on top. Was reproduced on newspaper covers across the globe. It has since become even more momentous, as it has given humanity a new and humbling perspective on its own fragility and that of Earth in the otherwise lifeless void of space. Apollo 17 was the final Moon landing mission of NASA's Apollo program; to this day it remains the most recent time humans have traveled beyond low Earth orbit and also the most recent time humans have set foot on the Moon. Its crew consisted of Commander Eugene Cernan, Lunar Module Pilot Harrison Schmitt, and Command Module Pilot Ronald Evans, as well as five mice in a biological experiment.

Launched on December 7, 1972, Apollo 17 was a "J-type" mission that included three days on the lunar surface, extended scientific capability, and the use of the third Lunar Roving Vehicle (LRV). Cernan and Schmitt landed in the TaurusLittrow valley and completed three moonwalks, taking lunar samples and deploying scientific instruments.

The landing site had been chosen to further the mission's main goals: to sample lunar highland material older than that of the Mare Imbrium, and to investigate the possibility of relatively recent volcanic activity. Evans remained in lunar orbit in the command and service module (CSM), taking scientific measurements and photographs. Apollo 17 was the first mission not to have a crew member who had been a test pilot; X-15 test pilot Joe Engle lost the lunar module pilot assignment to Schmitt, a geologist. The mission included the first night launch of a U.

Crewed spacecraft and the final crewed launch of a Saturn V rocket. It was also the final use of Apollo hardware for its original purpose (extra Apollo spacecraft were later used in the Skylab and ApolloSoyuz programs).

This portrait, featuring Her Majesty wearing a tiara and pearl earrings, was executed by the sculptor Ian Rank Broadley. The legend ELIZABETH II, the date of issue and denomination also appear, while the legend 1 OZ 999 SILVER guarantees the weight and purity. The coin is encapsulated inside a luxurious clamshell-style presentation case, lined with black velvet and satin, and protected by a full color outer cardboard box. An individually-numbered certificate of authenticity is included. The image of the back side of the certificate is a mint-supplied image intended for general reference only.

Serial number on image is NOT indicative of the serial number you will receive! The item "Niue 2022 Earth BLUE MARBLE Apollo 17 Moon Module $1 Oz Silver PrfMINTAGE 750" is in sale since Thursday, September 30, 2021.

This item is in the category "Coins & Paper Money\Coins\ World\Australia & Oceania\Australia\Commemorative". The seller is "talismancoins" and is located in Saint Louis, Missouri.