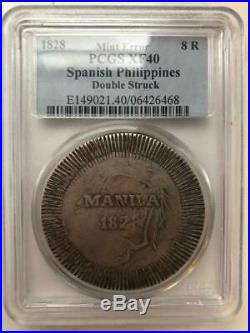 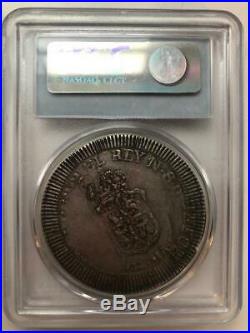 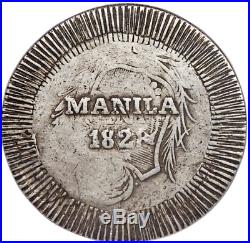 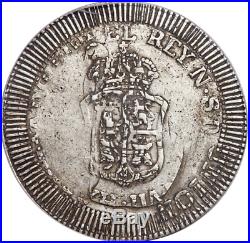 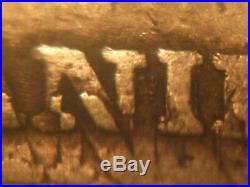 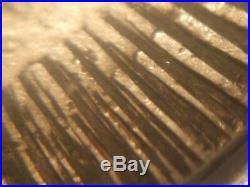 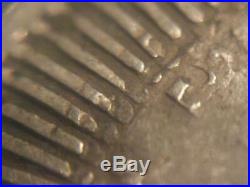 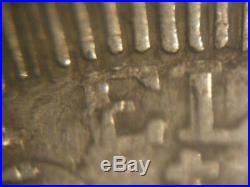 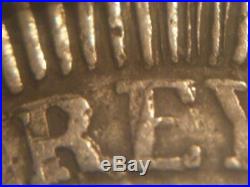 An exceptional rarity, the sole known example to have been double struck (noted as such by PCGS) and bearing a full, bold fluted border to both sides. Struck over a Peru Lima 8 Reales, dark graphite toning resides within the border areas surrounding central fields of argent, details of the undertype clearly visible on both obverse and reverse. This counterstamp coin is famous in numismatic circles its the only double struck piece to exist but it does not precisely match a regular Manila 1828. The lettering in the "Manila" is different and the reverse is different to an 1828 as it matches a Manila 1830 reverse. Here are the theories posted by some experts and non experts and my own opinion. 1 Its a new variety of Manila 1828 that is double stamped. 2 Its made using a modern chinese screw press. 3 Its genuine but has had the 1828 restamped over a Manila 1830. 4 Its one of the 500 trial strikes reported for the Manila 1830 die and this is a test piece. 5 Its an 1830 but the Manila on the top was worn out and they assumed it was an 1828 and altered the date to 1828. 6 Its an 1830 / 1828 Mule which shouldn't in theory be possible. My own opinion from having examined the coin and other matching examples over the last 10 years.

The coin is genuine and its a very old coin and I would lean more towards point 4 above that its probably a trial strike for 1830 because it has a real 1830 reverse and the border flute matches the serrations of an 1830 not an 1828 and the double stamp is because they where testing out the screw press and stamped it twice. The date not being 1830 probably its just one of the early test strikes and they just made the date and Manila manually which was not the finalised version.

It is a very interesting coin. Close up photos reveal an aged coin with original toning, and some some dirt and tiny abbrasions in the serrations which are done over time which is not fabricated. PCGS have examined the coin 3 times including their grading manager at PCGS paris and could not see any sign of alteration or alarm bells to suggest theres any issue, and they examined it closely under mircoscope.

The coin is in a genuine PCGS Slab and been slabbed 3 times in total and according to PCGS it is just a regular double struck Manila 1828, not a new variety so officially this is what the coin is. The item "PCGS Spanish Philippines Double Struck Manila 1828 XF40 8 Reales" is in sale since Wednesday, December 25, 2019. This item is in the category "Coins & Paper Money\Coins\ World\Asia\Philippines\Spanish (up to 1898)". The seller is "reyubarod" and is located in Hampshire.