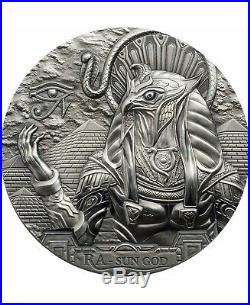 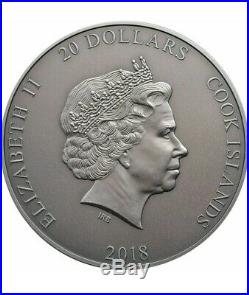 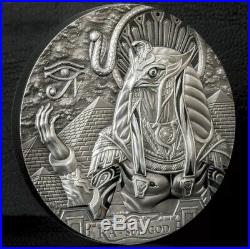 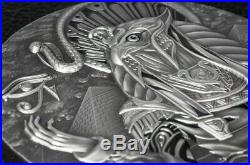 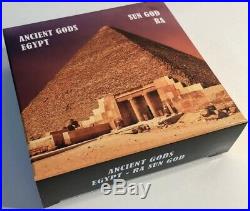 This is the second issue in the award winning God series coins. Ra, the sun god of the Egyptians. Minted in 3 ounces of pure. 999 silver on a 50mm blank using Smartminting.

This gives it high relief and utilies an added new special antique finish with dark highlights. Only 333 pieces were released worldwide. Ra is the ancient Egyptian sun god. By the Fifth Dynasty in the 25th and 24th centuries BC, he had become a major god in ancient Egyptian religion, identified primarily with the noon sun. In later Egyptian dynastic times, Ra was merged with the god Horus, as Ra-Horakhty ("Ra, who is Horus of the Two Horizons").

He was believed to rule in all parts of the created world: the sky, the earth, and the underworld. He was associated with the falcon or hawk. When in the New Kingdom the god Amun rose to prominence he was fused with Ra as Amun-Ra. During the Amarna Period, Akhenaten suppressed the cult of Ra in favor of another solar deity, the Aten, the deified solar disc, but after the death of Akhenaten the cult of Ra was restored.