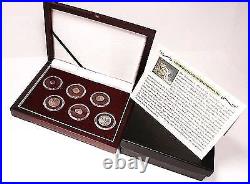 Renaissance Era 6 Silver Coins Collection. RENAISSANCE ERA 6 SILVER COINS COLLECTION. This unique box collection contains 6 genuine silver coins rich in historical and cultural significance from the Renaissance Era. Each coin is protected in an archival capsule and beautifully displayed in a custom made mahogany-like box lined with a rich red interior. Each collection is accompanied with a story card and certificate of authenticity and comes in a black embossed gift box. The Renaissance, (French for rebirth) was a great cultural movement rooted in 15th century Europe with the waning of the Hundred Years' War and the Byzantine Empire. It was an era defined by an unprecedented flowering of literature, science, art, religion, and politics--a resurgence of learning based on classical sources, the development of linear perspective in painting, gradual widespread educational reform, the development of global cultural interconnection, a weakening of the feudal power of the nobles and by default, a strengthening of the merchant classes. More than ever before, the Renaissance is viewed today as one of the defining periods in world history. Between 1400 and 1600, European perceptions of society, culture, politics and even humanity itself emerged in ways that continue to affect Europe and the entire world. Traditionally, this intellectual and cultural transformation was viewed as a bridge between the Middle Ages and the Modern Era, a gradual overcoming of the stagnation of the Medieval period. The progressive changes of the Renaissance were far from uniformly evident in every country at any given point in time. This disparity is especially noticeable in the varying quality of coins that were being minted in different countries.

This collection of Renaissance silver coins of Hungary, Italy, Germany, Lithuania, Russia and Austria illustrates this point. Some coins show a high quality of artistic design and manufacture, others still clearly continue to exhibit the typical crudeness of the earlier medieval types.

Sigismund was one of the longest ruling Kings of Hungary, reigning for fifty years from 1387 to 1437. These silver coins are called parvus (also called the small denar, filler or pankart).

The obverse of the coins depicts a four part shield with Arpadian stripes and eagle, S-V-R above and flanking, K or P (privy mark) at the right. The reverse of the coin shows four crowns between cross. Average weight: 0.3g; average diameter: 8.5-9mm.

This period of submission to France is indicated on these coins of the denaro minutos. They were struck under King Charles VI of France, and the Doge of Genoa, Antoiotto Adorno in the 14. The obverse shows the gateway castle (fleur-de lis at bottom of castle). Castle cuts across the lower part of the legend, while the fleur-de-lis in the second angle of the long cross is on the reverse. Average weight: 0.5-0.7g; average diameter: 12.5-14.5mm.

The name Salzburg literally means "Salt Castle", and derives its name from the barges carrying salt on the Salzach river, which were subject to a toll in the 8th century, as was customary for many communities and cities on European rivers. The city's fortress was built in 1077 and expanded during the following centuries. Independence from Bavaria was secured in the late 14th century.

These silver pfennigs of Salzburg are a uniface coin. Salzburg arm next to bishop's arms with the date above. Average weight: 0.4g; average diameter: 13-15mm.

Sigismund I, of the Jagiellon dynasty was King of Poland and Grand Duke of Lithuania from 1506 - 1544. He died at 81 years old. The Jagiellon dynasty was a royal dynasty that reigned between the 14th and 16th century. The obverse of the silver half groschen coins picture a knight riding left on horseback, reigns in left, sword in right. The reverse of the coin is an imperial eagle facing head left, wings spread.

Average weight: 1.1g; average diameter: 19.5-20mm. Mikhail Feodorovich Romanov was elected Czar at the age of 16 in an effort to bring an end to the fighting in Russia. He slowly pioneered his control over Russia and wisely avoided involvement in the wars of Europe. By the time of his death in 1645 he had founded the powerful Romanov dynasty, which was to last over 300 years, until the Russian Revolution in 1917. The coins are inscribed on the obverse side with the Czar's name and his titles in Old Russian script.

The complete inscription is often partly cut off. The reverse of the coins show a horseman with a spear. Average weight: 0.5g; average diameter: 9.5 x 12.9mm.

His rule coincided with the Thirty Years' War. These silver 3 Kreuzer coins have on the obverse a laureate, draped bust of Ferdinand facing right in the inner circle, the denomination in baroque is framed below. On the reverse of the coin are three flat topped shields of arms, points together, in inner circle, date at the top and rolled flan. Average weight range: 1.6g; average diameter: 20.5-23mm. This item is in the category "Coins & Paper Money\Coins: World\Collections, Lots". The seller is "airaco-inc" and is located in this country: US. This item can be shipped worldwide.