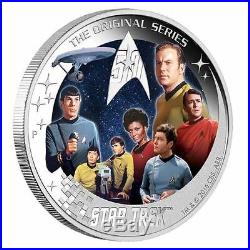 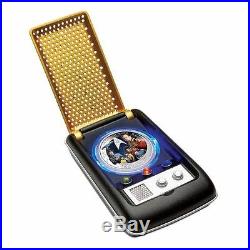 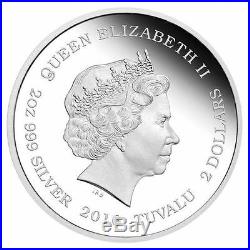 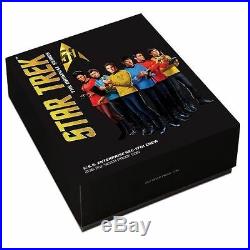 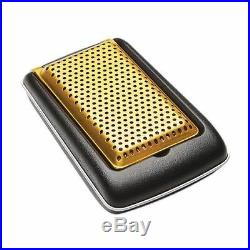 To celebrate the 50th anniversary of the cultural phenomenon that is. The Original Series, The Perth Mint is excited to release this awesome silver colored coin featuring members of the starship.

Proof Quality 99.9% Pure Silver. The coin is struck by The Perth Mint from 2oz of 99.9% pure silver in proof quality. The reverse of the coin portrays a colour image of the crew of. NCC-1701 including Captain Kirk, Spock, Uhura, Chekov, Dr. McCoy, Scotty, and Sulu as they appeared in.

The Original Series, against the backdrop of a galaxy. The design includes the inscription THE ORIGINAL SERIES STAR TREK and The Perth Mints traditional P mintmark. Issued as legal tender under the authority of the Government of Tuvalu, the obverse of the coin depicts the Ian Rank-Broadley effigy of Her Majesty Queen Elizabeth II, the monetary denomination, and the 2016 year-date. The Perth Mint will release no more than 5,000 of the 2016.

NCC-1701 Crew 2oz Silver Proof Coin. Themed Packaging and Numbered Certificate. This coin is housed in customized packaging in the form of a communicator a fictional device used for voice communication by the. This integral element of the show allowed for rapid communication across vast distances and inspired the future of mobile design. The item "Star Trek U.