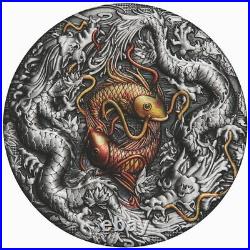 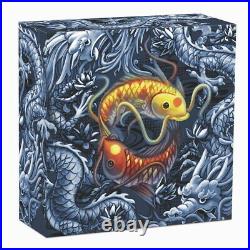 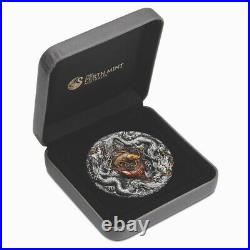 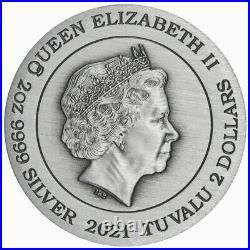 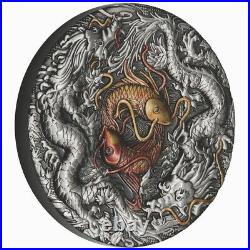 Get these Double Dragons before they sell out and the price skyrockets! Troy ounce pure silver beauty depicts the two Chinese imperial dragons touching whiskers with a pair of koi fish, highlighted in full color and forming a Yin Yang, in ultra high, medallic relief on this rimless, antique finish proof piedfort (double thick coin). In traditional Chinese culture, the dragon is revered as a divine creature and potent symbol of power, strength, wealth and good fortune. But did you know that its origin was as a humble koi fish? Read the full story below! There are no legends on the obverse of this 2 troy ounce pure silver gem, to further enhance beauty and heighten the drama of the Double Dragon vignette! This extraordinarily low mintage coin. Will undoubtedly sell out, and quickly! This beauteous gem is struck in ultra high, medallic relief on an extra-thick planchet (it is a piedfort) with an antiqued proof finish and full color. Between the extremely popular Chinese motifs, beautiful design and limited mintage, heed our advicestock up and get one (or more) of these stunning, 2 troy ounce, pure silver proofs while you can! The Legend of the Koi and the Dragon.

According to ancient Chinese mythology, a school of golden koi fish swam up a fast-flowing river, full of rocks and other obstacles, to reach a legendary mountain waterfall known as The Dragon Gate. The waterfall towered over the river, and defeated every koi's attempts to scale its elevation. Despite its seemingly impassable height, one kois repeated efforts to reach the top eventually proved successful! In recognition of its determination and perseverance, the gods turned it into the most auspicious creature in Chinese culture: the dragon. On this magnificent coin, the transformation of the koi fish into a dragon is symbolized by the interconnection of their colored whiskers.

The background depicts floating clouds, which are associated with deities, and lotus flowers, symbols of purity. Because of the desirability of the. Rimless ultra high relief format, the beefy two full troy ounces of pure silver, the antique finish, the hefty 5.9 mm thicknessto say nothing of the. Tiny mintage of just 888. A rapid sell-out at the Mint is expected! Rich in Chinese cultural references, the coins highly symmetrical design portrays two golden koi in the form of a Yin Yang or. Symbol encircled by two serpentine-shaped Chinese dragons. Koi fish are traditionally associated with happiness and harmony, and are often used as a good luck symbol for a happy marriage. In feng shui, the yin yang symbol represents the balance between the positive and negative energies within chi, the vital life-force of all living things on Earth. The subject of countless myths and legends, Chinese dragons are revered as wise and benevolent creatures with auspicious powers, particularly over the water and rainfall required for abundant harvests. Symbolizing nobility, kindness, prosperity and success, dragons were also seen as the embodiment of the emperor.

Because of the desirability of the phoenix theme, the ultra high, rimless medallic relief format, and the two ounce antique finish, as well as the. A rapid sell-out at the Mint is predicted!

The coin depicts two exquisitely detailed imperial dragons floating among the clouds. The mythical creatures encircle a pair of koi fish. The transformation of the koi fish into a dragon is symbolized by the interconnection of their colored whiskers.

The background depicts clouds, which are associated with deities, and lotus flowers, symbols of purity. The ultra high relief of the strike, the unique antique finish, and the enamel-like golden orange color of the koi create a medallic-like coin of unprecedented gorgeousness. There are no legends on the obverse, to further enhance the beauty and heighten the drama of the Double Dragon vignette! In keeping with its ancient themes, the coin has been antiqued by hand to give it a unique finish conveying the surface abrasions of an aged artefact. As a result of this treatment, the appearance of each coin of the extremely limited mintage may vary.

The Perth Mint will release no more than 888 of the 2021 Double Dragon and Koi 2 Troy Ounce Pure Silver Antiqued Coins. The Oriental or Chinese concept of the dragon is much different than the European notion of this beast. Whereas in the West dragons are nearly always evil, fire breathing creatures of immense size and destructiveness, in the East they are beloved.

Chinese dragons are benevolent, representing most auspicious powers, particularly control over water, rainfall, and floods. In yin and yang terminology, a dragon is yang (male) and perfectly complements a yin (female). The dragon is a mystical being, able to use an almost unlimited range of magical or supernatural powers.

It is able to disguise itself as a silkworm, or become as large as our entire universe. It can fly among the clouds or hide in water. It can form clouds, turn into water or fire, become invisible or glow in the dark. It is interesting to note that the Oriental dragon's ability to fly is a magical (not a physical) ability; unlike European dragons, Chinese dragons are rarely if ever depicted with physical wings.

Please see the presentation lower on this page for more information about Tuvalu and its association with Australia. Get yours today, don't miss out and don't delay!

In Chinese culture yin and yang represent two opposing principles in nature. Yin is characterized as slow, soft, yielding, cold, wet, and passive; and is associated with water, the earth, the moon, femininity, and night time. In contrast, Yang is fast, hard, solid, focused, hot, dry, and aggressive; and is associated with fire, sky, the sun, masculinity and day time.

This pure silver gem is struck in ultra high, medallic relief on an extra-thick planchet (it is a piedfort) with an antiqued finish. Between the extremely popular Chinese motifs, beautiful design and limited mintage, heed our advicestock up on these stunning, 2 troy ounce, pure silver coins while you can! This pure silver coin features a dynamic duo of the most powerful and auspicious of all the animals in ancient Chinese mythologythe Dragon!

With its highly detailed and well-executed design, high relief, full color, precious metal content, auspicious theme and extremely low mintage limit (only 888), we expect this gem to sell out quickly. Don't delay, get this beauty today! Popular with collectors for more than a century, and always hard to find, piedforts are highly sought after.

The first says that it literally means "strong foot" in French from. The second says this word was appropriated by the mint centuries ago to mean "heavy measure" or "heavy weight". In both cases, the sense of serious heft to the coin is obvious. Often the word "piedfort" is translated as "double-thick", but this is neither a literal translation nor a precisely accurate definition. Numismatically speaking, any coin that is 50% or more thicker than a standard version qualifies as a piedfort, although some piedforts are, indeed, twice as thick as normal.

Finally, the age-old question, How is the word pronounced? " Coming from French, it is not pronounced as it is spelled; that is, don't say, "pide - fort. Rather, "pee - ay - four" (three syllables) is a good approximation. Please see above for description. The reverse features Her Majesty, Queen Elizabeth II, in crowned profile facing right.

This portrait, featuring Her Majesty wearing a tiara and pearl earrings, was executed by the sculptor Ian Rank-Broadley. The legend QUEEN ELIZABETH II, the date and the denomination also appear.

The legend 2 OZ 9999 SILVER guarantees the weight and purity. The coin is housed inside a handsome taupe leatherette, clamshell-style presentation case, lined with black velvet and satin, and protected by a full-color outer box. An individually-numbered certificate of authenticity is included. Antiqued with Ultra High Relief. Natasha Muhl (obverse) Ian Rank-Broadley (reverse). The Island Nation of Tuvalu. Its nearest neighbors are Kiribati, Samoa and Fiji. It is comprised of four reef islands and five true atolls. Its population of 11,992 makes it the third-least populated independent country in the world, with only Vatican City and Nauru having fewer inhabitants. It is also the second-smallest member by population of the United Nations. In terms of physical land size, at just 10 square miles Tuvalu is the fourth smallest country in the world, larger only than the Vatican City, Monaco and Nauru.

The first inhabitants of Tuvalu were Polynesian people, who arrived about 3000 years go. The islands came under Great Britain's sphere of influence in the late 19th century. The Ellice Islands were administered by Britain as part of a protectorate from 1892 to 1916 and as part of the Gilbert and Ellice Islands Colony from 1916 to 1974.

In 1974 the Ellice Islanders voted for separate British dependency status as Tuvalu, separating from the Gilbert Islands which became Kiribati upon independence. Tuvalu became fully independent within The Commonwealth in 1978. With Queen Elizabeth II as titular head of state.

Because Tuvalu has few natural resources it has been dependent in recent years upon aid from larger, more developed nations, including Australia, New Zealand and the United States. The Perth Mint of Australia is officially commissioned by the government of Tuvalu to produce legal tender coinage for the island nation. The item "Tuvalu 2021 Double Dragon Koi Fish $2 Oz Pure Silver High Relief Antiqued Color" is in sale since Monday, August 2, 2021.